In recent years, I’ve become mostly ambivalent to Halloween and generally try to arrange any events to avoid the October Bank Holiday.  Until this year however, when I was commissioned to produce a show for Halloween Night at the Wexford Spiegeltent Festival.

I was really excited to put on a show inside the beautiful settings of a Spiegeltent and I wanted to ensure the show fit it’s environs and was suitable for the target audience.  I made a very conscious decision that we would stay away from the blood, guts and gore that became synonymous with the Sedition events that I had produced and promoted in the past.  I selected three of my favourite burlesque performers, who’s styles are very different to each other, Sade O’Sapphic, Foxy P Cox and Kat Moiselle, added in tribal fusion bellydancer LedBelly and of course, my super secret weapons Kerri Katastrophe and Sarah Vixyn.

I asked the performers for numbers that were quirky, fun, scary in a Hitchcock thriller, rather than a slasher movie way!  Red glitter = Good, Fake blood = Bad!  I had a concept for a duo performance many moons ago, I described it to Kerri and she choreographed the routine with Sarah.  It was exciting to see how she got inside my head and executed the concept perfectly!

On the night, we couldn’t have been happier with the reception to our show – Sade built a perfect rapport with the Wexford audience and in no time at all the crowd was whooping and cheering at all the right times!

Thanks so much to Nick at Lantern Events for commissioning the show and for looking after us so well.

With special thanks to Maynard Perdu and our assistants Deirdre J and Michelle Noir.

We brought our talented (and indispensable)  photographer friend Peter Griffin of Griffpics.com (see more images here) with us to immortalise the night, and were delighted that there was also already a capable bunch of togs working on the night who captured some stunning shots including the featured image above by Peter O’Hanlon, along with Deirdre Buggy and Kenny Ruttledge. 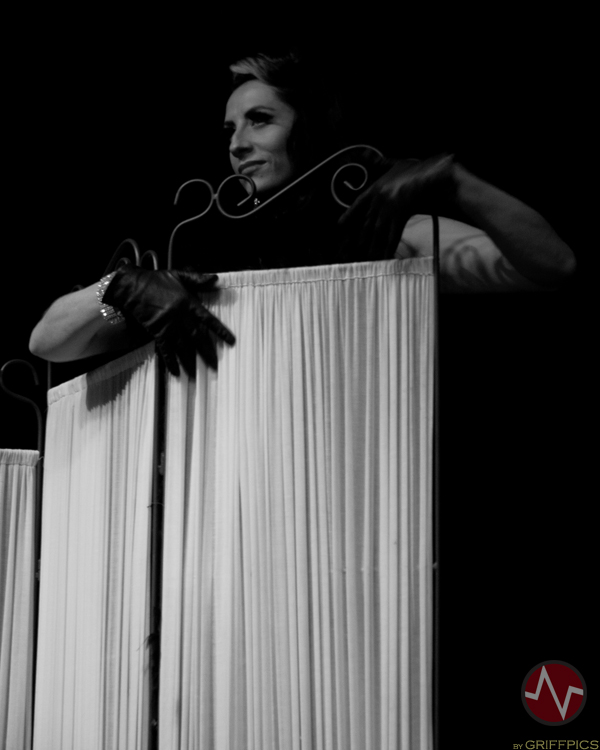 One comment on “Cabaret Caligari at Wexford Spiegeltent Festival”